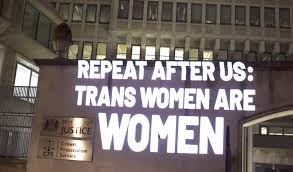 Last night the LibDems debated a ‘business’ motion about management of its conference. Ostensibly it was about respecting trans people & their pronouns & bathroom facilities. Of course it wasn’t about that at all. It was a trap intended to render future debate about women’s sex based rights impossible & make it easy to expel feminists & their supporters from the party.

When taken together with last week’s party definition of transphobia with its accompanying discipline policy, it is now a ‘crime’ to believe that trans women are not the same as biological women & unbelievers face compulsory re education or expulsion. Monday’s otherwise uncontentious motion included the phrase, “Trans women are women . . ” which opponents were told was integral to the motion & could not be removed by a separate vote.

This sets the stage for expelling any party member who believes the words of the party’s own constitution’s preamble that state: “we reject all prejudice and discrimination based upon . . . sex or sexual orientation”. It will no longer be possible to campaign within the party for women’s sex based rights under the 2010 Equality Act to be balanced & protected vis a vis trans women’s rights, because the party’s considered position is that they are the same.

In other words, it is no longer possible to differentiate between people with male bodies & people with female bodies, so there can no longer be any sex based rights. Members who say otherwise will be re educated or expelled. This is a terrifying & totalitarian position for a supposedly liberal party to adopt & completely undermines its position as a woman friendly organisation.

Women are potentially under threat from trans women or men who may pose as trans women in sport, prison, changing rooms, rape shelters, etc. Currently exemption protections are provided for in the 2010 Equality Act.

Out of line with moderate trans people

Women, don’t expect the LibDems to defend your sex based rights in future. You have been thrown under a bus by the party. The party’s trans policy has been adopted to accommodate extremists & is not in line with the views of many prominent trans people, including Debbie Hayton and Buck Angel, who accept that they retain the biological sex they started out with.

END_OF_DOCUMENT_TOKEN_TO_BE_REPLACED

The Liberal Democrats and Liberal Party before it have a proud tradition of defending liberty and advocating for social change. Going back over a hundred years, the state pension, social security, the NHS, legal abortion, the decriminalisation of homosexuality and the creation of same sex marriage are all associated with this movement and its members.

The party with has always believed that women’s rights are human rights and as recently as this March, LibDem MP Wera Hobhouse introduced a Hate Crime Bill, intended to tackle the ever present problem of misogyny.

Then on the 19th of September, on its platform LibDem Voice, the party published its definition of transphobia. You can read it here: https://www.libdemvoice.org/liberal-democrats-adopt-definition-of-transphobia-65868.html

Perhaps surprisingly, although it was drafted by three women, it contradicts the party’s own constitution on the subject of sexism and it is incompatible with the human rights of women.

Therefore, using it as a starting point, I drafted a definition of misogyny and submitted it to the LibDem Voice platform for publication. As a Liberal and Liberal Democrat since 1966, who has held many local party positions as well as being a LibDem councillor for over five years, I expected an acknowledgment at least, but this was not to be.

So, being denied a party platform, I am posting it here.

Over the last year it has become clear that the Party needed to explain how it proposes to recognise and defend the sex-based rights of women as defined in the 2010 Equality Act.

We know that some parts of the mainstream media and online social media have been actively trying to smear the female community and have promoted scare stories designed to frighten people into rolling back women’s rights in general and removing the protections they are allowed under the Gender Recognition Act in particular. We want to support members who want to call out misogynistic behaviour and challenge it both in and outside the party.

END_OF_DOCUMENT_TOKEN_TO_BE_REPLACED It was 9.00am. He stepped out into the sun. It was a clear, peaceful autumn day. He could hear traffic, but no sirens. He headed towards the tube station and shops.

Around the corner, the remains of a burned out police car were being lifted onto a flatbed truck. The introduction of martial law and the 9.00pm curfew had caused a few hiccups, but things seemed quiet now.

The tube station was open, though the presence of a police officer cradling a semi-automatic carbine was slightly disconcerting. “Eternal vigilance is the price of liberty,” he thought.

He stooped to pick up a copy of the free Metro newspaper. The banner across the top of the page read, “President Cummings’ first TV address from Buckingham Palace – full transcript P.5.

Then lower down, “Johnson ordered to see Trump again,” was the headline. At the foot of the page were pictures of three former politicians. “Traitors seek bail,” accompanied the story.

He paused to read further: “Lawyers acting for the disgraced former Prime Ministers John Major and Tony Blair and ex-Attorney General Dominic Grieve will today appeal for them to be released on bail while awaiting trial for treason, following their failed October coup when the UK was still a member of the EU.”

END_OF_DOCUMENT_TOKEN_TO_BE_REPLACED Over three years ago I was contacted by Professor David Anderson, a retired endocrinologist who lives in Umbria.  His Italian home is a short drive from Perugia.  He had an idea for a book.  Was I interested in getting involved?

We had first met in 2012 in Seattle at a gathering of supporters of Amanda Knox and Raffaele Sollecito, who were framed for the murder of English student Meredith Kercher in Perugia, Italy in 2007.  They were eventually released in 2011 after four years in prison.

END_OF_DOCUMENT_TOKEN_TO_BE_REPLACED Within days of her arrest as a suspect in the 2007 murder of British student Meredith Kercher, Amanda Knox was told that she had tested HIV positive.  This was a lie and the circumstances surrounding this fake test form part of her appeal to the European Court of Human Rights (ECHR).

You can read more about the ECHR submission here: http://bit.ly/1XmI1BH

As she records in her book, “Waiting to Be Heard”; the HIV episode occurred in November 2007, during the first month of her incarceration and almost a year before she was charged.  She and her boyfriend Raffaele Sollecito were in custody because a judge had decided that they “might kill again” and because she might be a flight risk.  This was an abuse of the Italian law on preventive detention which is only intended for suspected terrorists and known violent offenders.

The trap is sprung

The fake HIV test result news was announced to Amanda at a nightly infirmary appointment – this was a daily occurrence while her mental state was being assessed.

END_OF_DOCUMENT_TOKEN_TO_BE_REPLACED

I was looking for the Google cache of the misnamed ‘True Justice for Meredith Kercher’ hate site today. I don’t like to give those trolls any direct hits if I can help it. For some reason the cache does not show at the moment. All you get is a tab with links to ‘similar’ sites which takes you to other hate sites like their fake wiki. Still unwilling to give them the hits, I clicked on the ‘more results’ link. This took me to another Google selection.

This is how I found the cache of Uber Fuehrer Peter Quennell’s rant about Oprah Winfrey from 2010. He got very cross when Oprah had the temerity to talk to Amanda’s folks about the travesty of the 2009 Massei trial. Quennell plays the race card as hard as he can, especially for Oprah. This is part of what he wrote, with my comments in brackets:

“Oprah Gets Snowed: Why Was She Not Made Aware of The Race Card Being Played?”

END_OF_DOCUMENT_TOKEN_TO_BE_REPLACED

Sums the case up pretty well. Friends of mine are planning to attend the Chicago Loyola Knox Luncheon on December 3rd. I wonder if any of the trolls will show?

Amanda Knox and Raffaele Sollecito were arrested on November 6th 2007. After a year in prison they were indicted for the murder of Meredith Kercher.

On November 7th 2007, the day after the arrest, the Italian Minister of the Interior, Giulia Amati, declared that they were guilty. Their photographs were then placed on a ‘wall of shame’ at Rome Police Station, alongside pictures of convicted Mafia gangsters. This top level condemnation from the government emboldened the media. News coverage continued on the basis that they had already been convicted.

Within hours of Meredith’s murder, journalists flocked to Perugia. As soon as Knox and Sollecito were arrested, coverage went into overdrive. In the early weeks of the investigation, The Times of London was posting as many as three stories a day on its website. Everything that the police told reporters was published as truth. Many ‘facts’ turned out to be lies. None of this mattered. A good story doesn’t have to be true.

END_OF_DOCUMENT_TOKEN_TO_BE_REPLACED The presumption of innocence is the principle that a defendant is considered innocent until proven guilty. The burden of proof is on the prosecution, which has to collect and present evidence that establishes guilt beyond a reasonable doubt. The defendant does not have to prove anything. This principle is a cornerstone of justice in most advanced countries.

Soon after Amanda Knox and Raffaele Sollecito were arrested, Judy Bachrach wrote an article for Vanity Fair magazine. She quoted ecclesiastical judge Count Neri Capponi who informed her that things would not go Knox’s way. “Our system stems from the Inquisition and also from medieval law,” he explained. What this means, in effect, is that justice in Italy “is based on the supremacy of the prosecution. This nullifies the fact—written in our constitution by the way—that you’re innocent until proven guilty.”

END_OF_DOCUMENT_TOKEN_TO_BE_REPLACED

When someone you know is accused of a serious crime, you immediately reassess everything you think you know about them. If you scarcely know them, you will probably go along with whatever the police and prosecution say. If you know them well, you may be surprised. You may even know them so well that you refuse to believe that the accusations can be true.

If you know them, well, – so, so; not too well, but more than a little, you are still likely to be swayed against them. The British girls knew Meredith quite well; Amanda, not so much. Some had never met her. In the circumstances, their behaviour is understandable.